Having Randy Brecker to join them for Funky Huber, Speed, Smooth Colours and Let’s Vamos, they had the benefit of the most sought-after and ideal jazz musician for this project. This excellent trumpet and flugelhorn player, who, together with his style-setting, tenor saxophonist brother, Michael (1949-2007), formed the famous “Brecker Brothers” group, had re-mixed the fusion and jazz-rock sound and had played and recorded with various greats, such as Horace Silver, George Benson, Frank Zappa and Lou Reed.

Participating on two other titles, Back in the Pan and Kostalogy, is star soloist Bob Mintzer. Mintzer became extremely popular as a member of the Yellowjackets and by playing with Art Blakey, Donald Fagen, Jaco Pastorius and Nancy Wilson, among others.

Tony Lakatos is emphasizing the sound of “Charlie Brown”, a mid-tempo organ shuffle and the dreamy jazz waltz “Too Late Now”. Lakatos, from Hungary, is a highly regarded soloist with the HR Big Band and also plays with singer Kevin Mahogany, drummer Al Foster and pianist Kirk Lightsey.

Jermaine Landsberger, originally from a Sinti family, has, for more than ten years now, transposed his highly accomplished and stimulating melodic piano style to the Hammond B3. His début on the Resonance label, together with guitar legend, Pat Martino, caused a sensation in the US media: “Originally a guitarist as well as a pianist, Landsberger focused more recently on the Hammond organ, on which he absolutely burns” (guitarplayer.com).

With numerous Brazilian jazz projects, as, for example with Grammy winner, Leny Andrade and the “Night of Guitars”, featuring Larry Coryell, Paulo Morello enjoys an excellent standing as one of Europe’s most versatile guitarists. His distinctive and expressive style is certainly influenced by the legendary jazz guitarists, Joe Pass, George Benson and Mike Stern. His switch to Hammond organ came in 2004, when Morello was a sideman with the legendary Jimmy Smith on his last European tour.

Christoph Huber, the drummer and a former sideman with Sarah Connor, Sheila Jordan, Jeff Cascaro and Torsten Goods, among others, makes an impressive contribution to the sounds of “Hammond Eggs”, mastering complex rhythms and playing with an animated funkiness.

Back in the pan 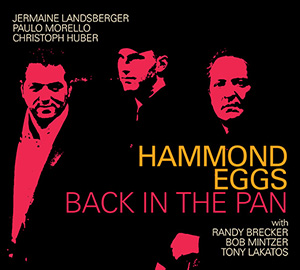